skip to main | skip to sidebar

For almost 3 years I have had the "need" ... okay the want... to have a CNC machine to work with.
Well that dream was finally realized and I am extremely excited !! This is not BIM related, but it really ties in to another passion of mine. Plus who know, maybe I can start studying how BIMs can be utilized for manufacturing.

The machine I have is a  36" x36" 3 axis which is perfect for "hobby use". I build a routing surface from MDF and believe it or not, it is very portable. What is even greater is that it is controlled by my Surface Pro (yes very impressive little device)

I did have a little bit of background on the creation of tool paths and g-code. But had never really done it. There is nothing like the hands on experience. There is a learning curve and I have only scratched the surface at this point. However I am pleased with the results. I had the machine make some drawings for me as I am waiting on the router and some small accessories; I wish I would have had this machine when I was in Design school and need to produce hand drawings on mylar ;) ... Ha, maybe I can offer this to architecture students.

Anyhow here some images of what I have been working on.
Until next time !

As I mentioned earlier, I am in the process of modeling my surface pro as accurately as possible,
The idea is to build a parametric family, with different levels of details and different options for accessories as well as other standard surface articulation !!

Check back soon for updates ! 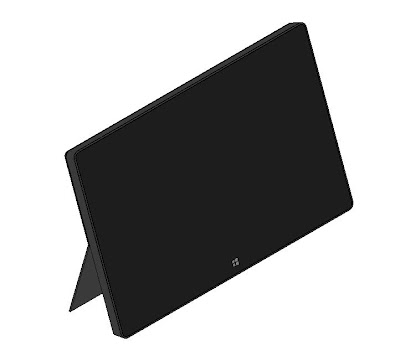 Tablets mobility and Bim... The search for the perfect companion.

I few years ago when the first iPad came out, I began to to look for ways in which it would fit my life and work. I started to analyse if I could somehow justify the investment. Being the gadget geek that I am its quite unbelievable that I resisted the urge and never really bought one as I always felt is was quite limited and more of a novelty or entertainment device.

Fast forward to the android revolution and I, being a new convert (yes the wife converted me from a blackberry to an android touch screen at that time) I began to entertain the idea of purchasing an android tablet. I was particularly fond of the Note series and I could see myself  taking notes and sketching with the stylus, What was appealing at this time was that I had adopted the Google services and there could be real use for such device. However for me the biggest draw back was being limited to apps and not being able to run any real programs - it was almost not better than an iPad.

Let's fast forward again... I have finally purchased a tablet !.. no a laptop, not a tablet with a keyboard...
I had purchased an ASUS TF810C. I was very please with the device, how light it was, and above all it could run windows applications being a full Windows 8 tablet and it had a dock and stylus as well. I have to say that I was aware of the surface pro coming but I just had to try out the ASUS. The device proved to be great for light tasks, but not necessarily what I was looking for - I wanted to do Bim on a tablet, but I felt it was a bit slow with the Atom processor and the 2GB of ram. 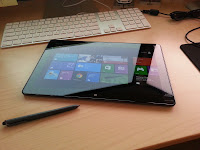 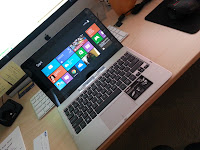 It was a beautiful device but I had to part with it, so I passed it to one of my colleagues and I purchased a Surface Pro 128GB !

I have to say that despite its "short" battery life and weight I love it. What its remarkable about it is that even though it only has 4GB of ram, I am able to do Bim with it.  Last week I conducted a coordination meeting over an internet meeting service right from the Surface !  I was impressed with its performance.  No lag, no stuttering. I had both Revit and Navisworks running at the same time. These were not small "demo" models either, these were pretty complex. Whats even more interesting was that I was able to save viewpoints and annotate them right on the screen with the stylus. While this device is not perfect, it really fits me. It is portable, powerful, keeps me connected and most importantly it allows me to do one of the thing I love to do - Bim !

PS: To celebrate, I decided to create a Revit family of my Surface Pro. I connected the device to an external screen and keyboard and began the process. I hope you enjoy it. (It still needs a little work but its a good start) 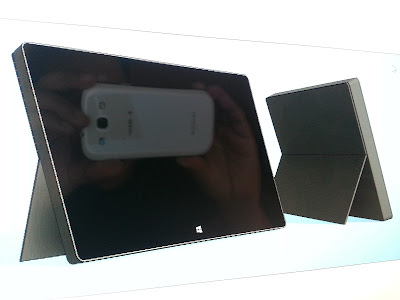 It's a small world after all.

Its been a while since I posted anything interesting. It has been a very busy 3 years since my last post in 2009. I have been working on my B.arch and at the present time I am most interested in digital fabrication, and construction modeling. Not that architecture is not beautiful.

Anyway, I am currently back at www.digitaldraftingsystems.com. I'm currently exploring 4D simulation and clash detection modeling, part of a new line or services I am developing.

BTW, if you are in NY and need some as-builds check out Brian Curran. He deals with some cutting edge technology - 3D laser scanning.  If you are Revit users, you can use some of the files created by 3d scanning devices in your model. He also is able to generate some nice looking floor plans and elevations. check out his website under my helpful links !
Posted by Unknown at 8:21 PM

A time for change ;)

Well everyone, I am not longer a consultant for Digital Drafting Systems. Where have I been?
The past six months I have been fullfilling CAD / BIM manager dutties at Kobi Karp Architecture and I am now back to the revit scene on my own. Stay tuned for what I am preparing next !

if you need to reach me you can send me an e-mail
crullier(AT)bellsouth.net
Posted by Unknown at 10:10 PM

Where have I been ?

It’s been over a moth since I posted something new on my blog. But the reason is the amount of Revit training and events we have been taking care of! At the beginning of the month I flew to Orlando to train a second group of professionals on Revit Architecture at one of our Multi-discipline large accounts. I have also been locally bringing up to speed and working very closely with a Construction / Architecture firm in West Palm beach, and lastly yesterday we were the host of a delicious Latin lunch during Autodesk’s Road Tour at the Miami Beach Convention Center. Our clients are so happy with our trainings sessions that keep scheduling more groups for us to train.
Let the pictures speak for themselves:

This is the Orlando group during a break. They didn’t want to leave their chair and wanted to keep on learning Revit ! 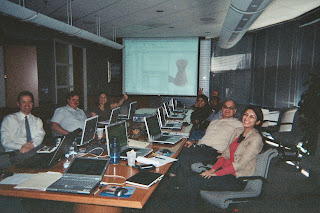 These are some pictures of our Latin Lunch, we even had Salsa dancers in the room to spice things up. It was a pleasure for all of us, AEs, to answer questions and to show new features of the 2009 Autodesk products to all our customers attending the event. Keep posted for my next blog on Mental Ray rendering in Revit and 3dsmax Design. 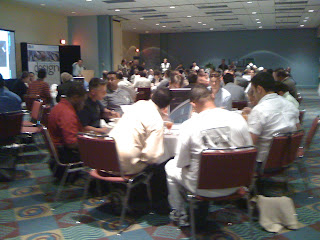 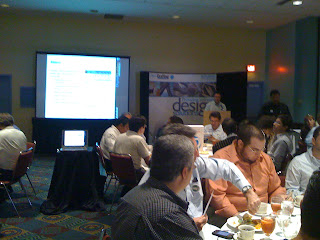 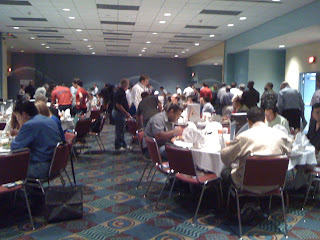 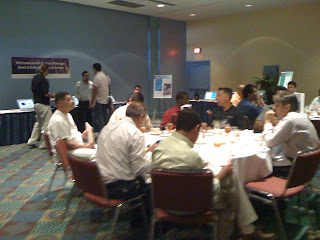 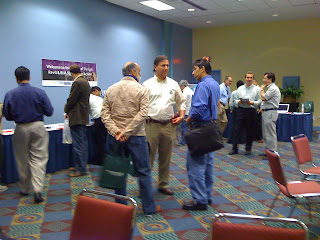 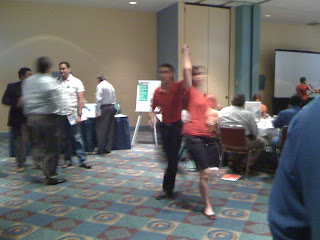 Hello again, I want to make available the link bellow to an Autodesk maintained resource page. In there you will find tutorials and application white papers to compliment what you have already learned. Notice the I am linking you directly to the Revit section but please be sure to check out the other disciplines. Happy Reviting ! 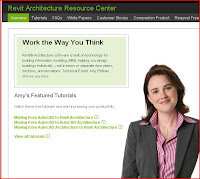